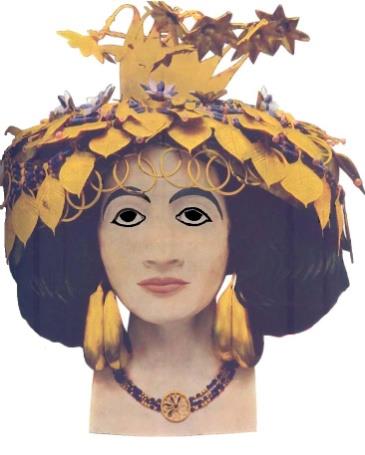 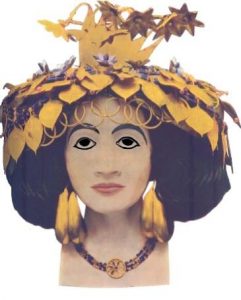 Four thousand five hundred years ago, a Sumerian noblewoman, known as Queen Puabi,[i] lived, ruled, and died in the city of Ur in ancient Mesopotamia, modern-day Iraq. In 1920 her body was found in a royal tomb along with the remains of five soldiers, two oxen and their four grooms, plus seventeen ladies-in-waiting, all sacri­ficed to be of service to the Queen in the afterlife.

Along with her elaborate golden headdress and jewelry, a cape made of strands of lapis lazuli and carnelian beads, rings on every finger, and a gold and jeweled diadem, there were furniture, an exquisite gold and lapis lyre, a sled, textiles and a multitude of golden ornaments and vessels. Among all of these precious artifacts, archeologists also found cosmetics which would have been used for adorning the eyes and lips. It seems that forty-five hundred years ago a Sumerian noblewoman loved her lipstick enough to be buried with it!

Some anthropologists believe that humans have been decorating their faces and bodies ritualistically for over 100,000 years, since the Paleolithic age. Makeup, including lipstick or its equivalent, has been around for a very long time.

Over thousands of years, lipstick has been made from a wide variety of ingredients. Queen Puabi’s lip color would have been made from crushed gemstones or iron rich minerals and, possibly lead, which is toxic. From the days of the Greeks, Romans, and Egyptians to the last years of Victorian England, women have blended ingredients such as red ochre, red wine, mul­berries and seaweed, gum Arabic, egg whites, and fig milk into tinted lip balms. First Lady Martha Washington used a recipe including beeswax, lard, sugar, almond oil, alkanet (a plant based red dye), raisins, and balsam.

In a recent scandal, it was disclosed that Starbucks uses cochineal, a red coloring made from dried insects, to color their Strawberry Frappuccino®. Yet the same crushed bugs have been tinting lip color for centuries.[ii]

Today, unless you buy lipstick that is stamped USDA Organic or certified by the Natural Products Association, you may be applying lipstick that is made from rendered animal fat, tissue and body parts, as well as pigments, fish scales, wax, and oil, not so different from what Mrs. Washington concocted.  However, you may also be using a product that contains formaldehyde, coal tar, benzene, nitrosamines, talc and even lead, ingredients that can be dangerous to your health. In a study done by the European Scientific Commission on Consumer Safety, over a lifetime, the average woman may ingest close to 4 pounds of lipstick.[iii] If you have concerns about what you are wearing and eating, check your labels!

Excerpted from What’s My LipStory? An Illustrated Guide to Understanding the Messages in Your Lip Prints by Pamela Fox Copyright © 2015 by Pamela Fox

[i] To learn more about Queen Puabi (aka Queen Shub Ad or Ur) go to:

[ii]Find an article on the history of lipstick at: http://addictedtoblush.blogspot.com/2009/07/history-of-lipstick-use-in-ancient-and.html

[iii] To read an online article about how much lipstick a woman eats in her lifetime go to: